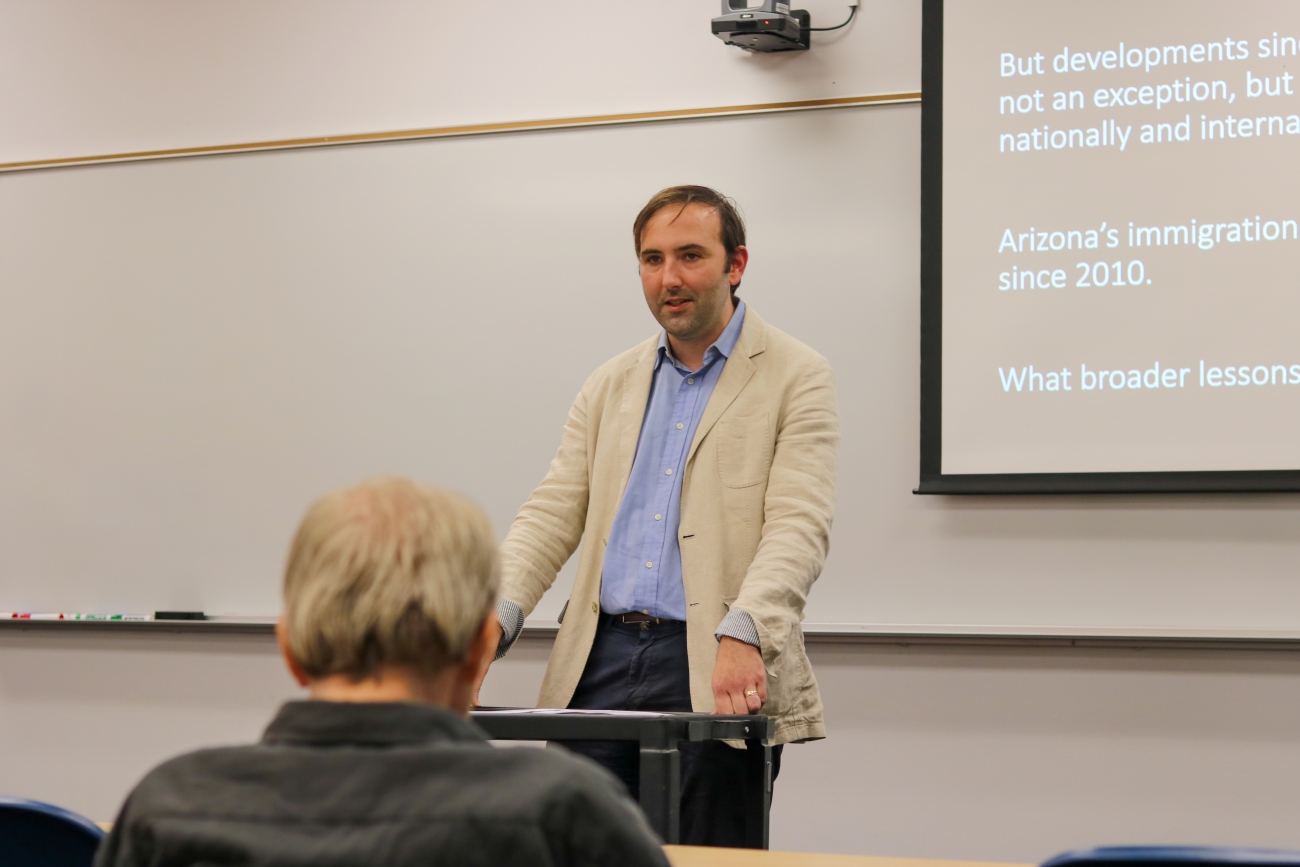 How do we think about immigration?

Mike Slaven, senior lecturer in international politics at the University of Lincoln, shed insight on this question at a recent event with the School of Politics and Global Studies titled “Arizona’s Lessons for Global Migration Politics.”

“Arizona has frequently served as the epicenter of US immigration controversies,” Slaven said.

Slaven notes that while Arizona is not in the same place politically in 2022 as we were in 2010, immigration and the border still remain heavy political issues.

Back in 2010, Arizona passed SB 1070, which was thought to be the broadest and strictest anti-illegal immigration law in the United States at the time. Originally seen as an extreme outlying measure, Slaven acknowledges that “developments since then show Arizona was not an exception, but a forerunner – both nationally and internally.”

Slaven’s recently published book, “Securing Borders Securing Powers,” attempts to engage in the conversation of what the trajectory in Arizona can teach us about migration politics worldwide.

Slaven met with SPGS to discuss how we might be able to apply these lessons to present day Arizona and globally.

Question: Do you think these same underlying takeaways from your research still stand today as we approach election season in Arizona?

Answer: A recurring topic of my book is fractures within the Arizona Republican Party, and we can clearly trace these fractures from the SB 1070 era to this year’s elections. It was the farther-right faction of the party banging the drum on the threat of immigration and arguing border security was a national emergency, where chamber of commerce-style Republicans saw these issues as more complex and less of an overwhelming priority. Over time, the farther-right faction put huge pressure the chamber Republicans to follow along, which is how we got SB 1070. But the business wing surprised people when it eventually put its foot down after it became worried that 1070 was giving Arizona a negative image, which is what effectively brought that era to a close.

The big topic of controversy between these factions is now the 2020 election conspiracy theories, but they have remaining differences on how to approach the border, and this year business Republicans suffered lots of primary defeats (though many results were close). So, several far-right Republican statewide candidates are hoping to ride economic tailwinds into office, but are short on issues to run on that can broaden their appeal, since so many of their positions are so extreme, including on the border. The Republican Governors’ Association has run border attack ads against Katie Hobbs, the Democratic nominee, but a risk of this strategy is that it just highlights the extreme views of the Republican nominee, Kari Lake. Lake’s style of anti-immigration, “build the wall” politics continues to play well among many Republican voters, but it now lacks the kind of traction among the broader Arizona electorate that it previously had in the SB 1070 period.

Q: How do you see U.S. states and countries globally approach immigration policy since the rise and fall of the era in Arizona that produced SB 1070?

A: In my book, I argue that as extreme as Arizona was portrayed as when it passed SB 1070 in 2010, it turned out to foreshadow national and international trends. Globally, many European countries, especially, have undertaken this kind of hardline policy trajectory amid growing political controversies over immigration. Nationally, we saw immigration emerge as a major campaign issue in 2016 in a way that hadn’t really been seen in a modern presidential election, 10 years after the border had rapidly emerged as a major campaign issue in Arizona.

Arizona led the way on states (and cities and counties) becoming active in this policy domain that had long been regarded as exclusively federal. Today, governors in states like Texas and Florida are being provocative about border security in ways that many Arizona politicians became more hesitant to do after the fallout from SB 1070. Looking at Ron DeSantis’s recent move to send a group of Venezuelan immigrants to Martha’s Vineyard, it’s reminiscent of the kinds of stunts that Joe Arpaio became notorious for as Maricopa County sheriff. Of course, Arpaio was intensely mobilized against by Latino/a activists, which is a major reason that his once very high star fell and he eventually lost re-election in 2016. Whether other places follow Arizona into a less heated situation, where political leaders hesitate more to push the envelope, remains to be seen.

Q: Do you believe social activism has reshaped views on immigration policies/laws? If so, how?

A: Activism against hardline policies like SB 1070 definitely made a lot of Arizona political leaders think again about how they would approach immigration. Business Republicans saw that they couldn’t just simply go along with these sorts of policies along without risking consequences that really concerned them. And for Democrats, it changed calculations about whether they should cede ground to the border hardliners, which they had often done before 2010 as part of larger political calculations to advance signature policies or remain in power. That became less politically tenable for them. As a result, today in Arizona we have a situation where Democrats have clearer red lines on immigration and border issues, and business Republicans feint to the right on the border to gather political support but avoid leading provocations – Doug Ducey, for instance, has followed some of the border-related moves of figures like Greg Abbott in Texas, but has clearly avoided being out in front on this issue. Of course, the farther-right in Arizona continues to see these issues in very hardline and envelope-pushing terms – and many of these figures could win elections in November – but they are no longer as clearly shaping the discussion at the middle of the political spectrum as they once did. A large part of this new configuration is down to the work of Latino/a activists and organizers, who also galvanized a wider network of groups around them post-1070.