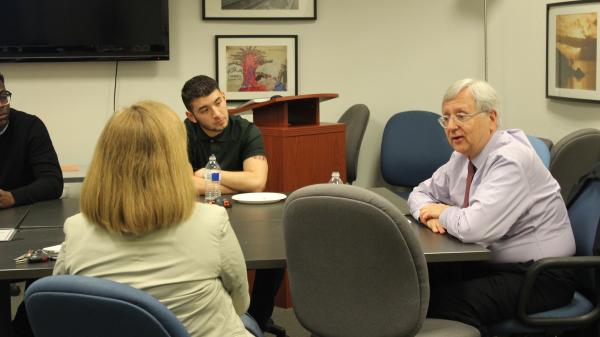 Thomas E. Mann, Senior Fellow in Governance Studies at The Brookings Institution and Resident Scholar at the University of California, Berkeley, was the inaugural speaker for the School of Politics and Global Studies’ Kramer Lecture Series on Tuesday.

Mann’s latest book, co-authored with Norman Ornstein, titled "It’s Even Worse Than It Looks: How the American Constitutional System Collided With the New Politics of Extremism" is a New York Times bestseller. He was also recently named by Foreign Policy Magazine among as one of the “100 Top Global Thinkers of 2012” for “diagnosing America’s political dysfunction.”

The inaugural Kramer Lecture was made possible by an endowment from alumnus Victor Kramer who studied Political Science at ASU from 1958 to 1961. While at ASU, Kramer was also a member of the political science honorary fraternity Pi Sigma Alpha. Kramer’s donation to The School is used to create an annual speaker series, featuring political science speakers such as Thomas Mann .

Pi Sigma Alpha’s mission at ASU is to expand student opportunities for the future while furthering education and lifelong contributions in the field of political science. Thomas Mann’s opening remarks for his talk on elections touched on his high regard for the national honor’s society.

“One could look at this election campaign and say we could use a lot more Pi Sigma Alpha in the world.”

“We don’t govern ourselves well over the long hall without two serious parties, one left of center and one right of center.”