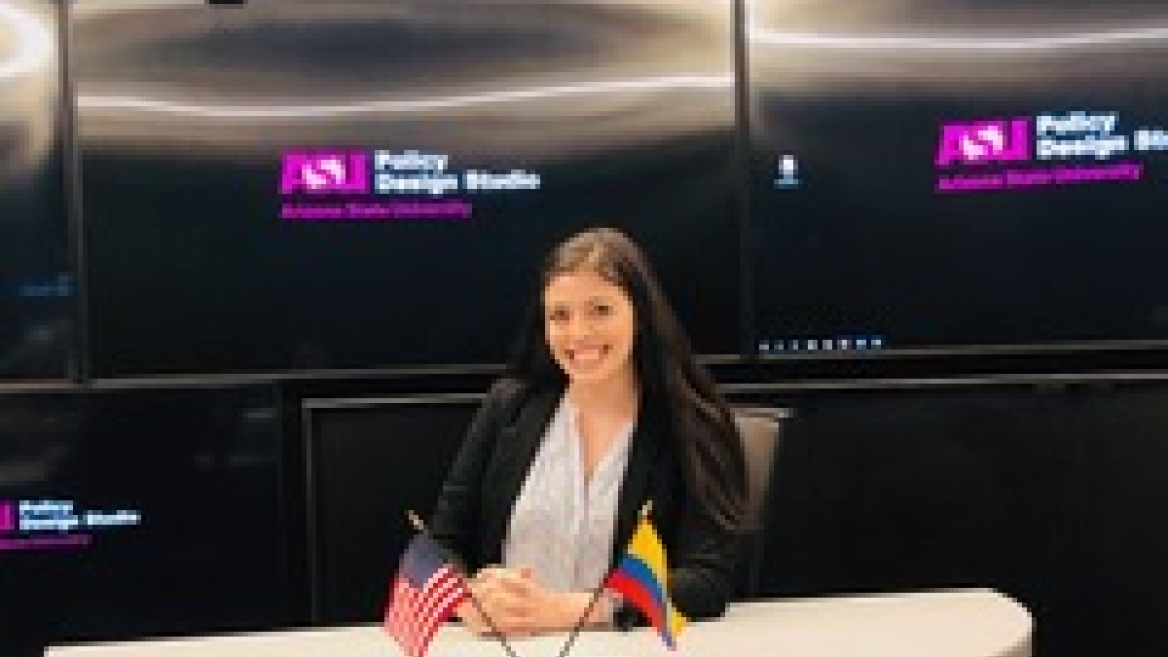 ASU student pursues her passion for global politics in DC

As the fall semester came to a close, many Arizona State University students spent their time toiling away on essays, cramming for exams, and consuming enough caffeine to get them through the final days of their classes. But for Maya Perez, a junior double-majoring in political science and global studies, these past couple of weeks could not have been more different.

“I am so grateful to be doing something I love,” said Perez, “There is so much to gain from being exposed to an environment like D.C.”

Perez was a member of the School of Politics and Global Studies’ Policy Design Studio and Internship Program through the McCain Institute. Essentially, for one semester, Perez and the rest of her cohort interned in our nation’s capital while taking a weekly class for 12 upper division credits. Given her interests and ambitions, it was only a matter of time before Perez ended up in a place like Washington, D.C.

Perez became interested in politics even before she was a student at ASU. During the 2016 presidential election, she found herself fascinated by America’s political process and knew she wanted to be a part of it. Even though she had yet to familiarize herself with many of the topics being debated, she was ready and eager to learn.

“There were so many issues I wanted to know more about and do something about. That’s where I first became interested in political science,” Perez explained.

Yet in a field like political science, there are so many different issues to learn. Some students look at the government’s effects on the economy, some examine its role in social issues, and some study its very structure. Perez, however, identified her passion once she took Professor Okechukwu Iheduru’s “African Politics and Society” class.

“As an American, I had this ingrained idea in my head about what Africa was like,” Perez admitted. “But Dr. Iheduru completely uprooted it in this class.”

That semester, Perez not only learned about the rich history and culture that make Africa such a unique continent, but the lasting legacies of slavery and colonization and all of their adverse effects on the continent. Each of Iheduru’s lectures illustrated Europe’s and the United States’ complicated relationship with Africa, while guiding students like Perez to learn about how America is trying to mitigate some of the problems that it helped create. This eye-opening course proved to be a life-changing experience for Perez, who left with an informed perspective and a desire to learn even more.

“Rather than approaching our country’s relationship with Africa as a question of how to help them become just like Europe or America, we learned how we can provide Africa with the resources it needs to achieve its full potential, on its own terms,” Perez said.

Though classes like Iheduru’s provided Perez with a wealth of valuable information and sparked her interest in Africa, she wanted to get outside the classroom to apply all that she had learned. That is where the McCain Institute came in. On top of a weekly class that simulated what it is like to work in an American embassy, Perez spent the semester interning with the Corporate Council on Africa (CCA), a Washington, D.C.-based trade association focusing on strengthening commercial relationships between the United States and the African continent.

Perez’s internship with the CCA gave her the unique opportunity to make important contributions to the organization’s work. Her supervisors entrusted her with a variety of responsibilities, ranging from research to attending congressional hearings, where she could observe African heads of state interacting with American legislators. Perez’s work in this fast-paced environment also sharpened her communication skills, work ethic and professional network.

“In D.C., it is really easy to get stuck in an internship where you might just sit around and be someone’s personal assistant or get stuck somewhere where they don’t take you seriously,” Perez said, “But the CCA made me feel included and valued. I am so appreciative that my mentors wanted me to make the most out of my time here.”

After returning from Washington, Perez will continue her studies in foreign affairs and its effects on Africa. Even though she will have more than a year left in her undergraduate studies, Perez is already thinking about graduate schools and how she can shape her career.

“Interning in D.C. and participating in the McCain Policy Design Studio has made me a uniquely special candidate for whatever I apply to after graduation. This experience was totally worth it,” Perez said. “It taught me so many things not only about political culture, professional environments, but also about myself and my goals for the future.